This looks familiar. According to Wikipedia, it’s a new adaptation of a manga from the 60’s, so I’ve probably seen this kid around, but I feel like I’ve seen this exact image: 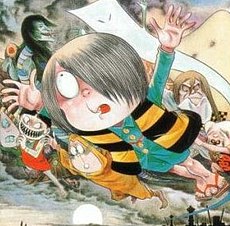 somewhere, and I can’t for the life of me think where.

Oh, well. It doesn’t matter. On to the thing.

Oh, God it’s Toei. That means this series will look good for one cour, but if it goes beyond that it will swiftly degrade into shit. Man, Toei is just the worst. I fukken hate Toei.

I wonder how many “arrested for YouTube crimes” have already made at the expense of that stupid crosswalk kid. I don’t wonder enough to want anyone to tell me, but I bet it’s a lot.

It’s a bit weird how most of the characters have modern character designs when the original manga is from 1960. Maybe it was to make Kitaro stand out a bit, or to make the series seem less like an adaptation of a manga from 1960, but part of the appeal of these Showa remakes is that they don’t look like the rest of the stuff out there. Of course, I’ve never read the manga or watched the other series, so maybe the characters looked like that back then, too. I find that extremely unlikely, but it is theoretically possible, I suppose.

I was curious whether or not vampire trees were an actual yokai or if they were just making a pun off ‘kyuketsuki’ (since ‘ki’ can mean tree) so I looked them up. It seems they’re something made up by the original manga-ka, but there they’re called jubokko and they grow on battlefields. So maybe Toei is making a pun. I held out to see if they’d be called jubokko at all, but they weren’t.

Is Eyeball’s surprise that Kitaro is still alive meant to imply that the rest of the people who got turned into trees are dead? Cause if so, that’s fukken dark.

Not sure why beating up the other eyeball monster would make the trees turn back into people. I guess a wizard did it.

I liked this episode, but I didn’tt like the cliffhanger they ended on. It seemed a bit cheap. Of course, I know they aren’t going to kill off the title character in the first episode, but the kids this is targeted to might not. I also didn’t expect this to be a fairly typical monster-of-the-week supernatural fight anime, complete with called attacks. I don’t know what I did expect, but that wasn’t it.

I might stick with this. The characters haven’t left any sort of impression and the art style for the most part is pretty generic, but I like yokai and the battles seem like they might be entertaining enough. I’m going to give this three episodes for now, but that’s mainly just because whether I’m sticking with this is currently dependent mostly on how much other anime I’ll have to watch on Sundays this season.