Ah, April. When the weather can’t decide if it wants to be hot or cold, seasonal allergies are in full swing, and the bugs begin to awaken from their winter naps and return to their usual business of annoying the living crap out of everything that doesn’t eat them. But before that, it’s time to look back on the last three months of anime and shame you for not being a fucking nerd who watches literally everything.

Or at least, that’s what I’m doing. Since my fellow reviewers may or may not pay even the passing attention I do to which anime are and are not being watched, I gave them the option to either spotlight an anime they felt was unfairly overlooked as I do, or talking about whichever series they’d recommend to the most number of people with the fewest number of caveats.

Either way, here are the Winter 2021 Anime You Should’ve Been Watching.

What’s It About? Vlad Love is an original anime from Mamoru Oshii, director of the original Ghost in the Shell movie. It stars a high school girl named Bamba Mitsugu, who has a fetish for donating blood, and the vampire girl Mai Vlad Transylvania she meets one day on the street. The plot focuses around Mamoru Oshii telling you about his favorite classic movies for six hours.

Why Should I Watch It? There are a number of reasons this anime should be on your radar, first and foremost that it is an original work by one of the most acclaimed directors in the industry. The other primary reason you should watch it is so you can discover what it looks like when a production team is given carte blanche to do whatever they like with zero regard for narrative cohesion, and also to experience what it is to see a piece of media with its own mental disorder.

Is There Any Reason I Might Not Like It? Some people might find the series a bit dull if they don’t share its sense of humor. If you aren’t particularly thrilled by Gintama or FLCL and don’t care about dorky movie homages, you probably won’t get much out of Vlad Love.

The cast is relatively solid. They’re all fun and bounce off each other well, and the voice cast carry this series like Christ carrying the cross to his crucifixion. You could point at pretty much any named character in the series and develop a Stockholm-esque fondness for them.

Where Can I Watch It and How Long Is It? The series is twelve episodes long, and you can stream the whole thing in a single sitting while doing acid in an attempt to invent a new mental illness. The first episode is bad though, keep that in mind. [EDITOR’S NOTE: The series is on Crunchyroll.]

Charlie’s Recommendation: So I’m A Spider, So What?

What’s It About?: Standard isekai has our delightful protagonist reincarnated in another world… as a spider (monster)! Shenanigans ensue.

Why Should I Watch It?  It’s a delightful take on the concept, with a fun protagonist, realistic problems, and an intriguing mystery to unravel.

Is There Any Reason I Might Not Like It? The main character is a spider, so proper arachnophobes should probably steer clear. It is slightly gore-y, and though it does have it’s light hearted moments, it’s not afraid to delve into some heavy material. Also, the merging of CGI and traditional 2D animation isn’t the best, and the B-Plot with the other reincarnated characters can get a little boring. 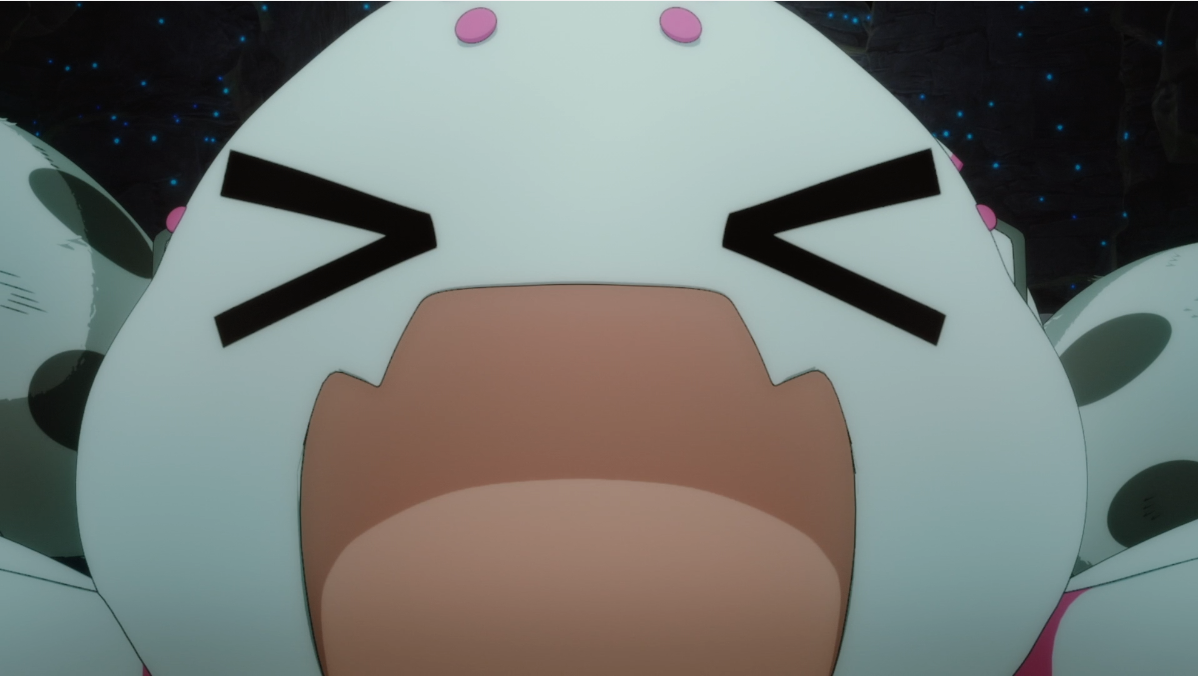 Our daring protagonist is a clever, stubborn, funny, delightful character, who is very much what you might expect from a teenage girl reincarnated as a spider in a hell labyrinth.

Where Can I Watch It And How Long Is It? Currently on Crunchyroll! There’re currently 12 episodes at about 25 minutes each, and dubs in several languages, including English, Protuguese, Russian, and French, among others, which are only slightly behind. There’s also the original light novel series and a manga adaptation, each of which are slightly different due to their respective mediums, and can be easily found via Google.

What’s It About? It’s a coming of age sports anime about skateboarders, focusing primarily on a pair of high schoolers but also including a middle school catboy, a florist, a thirty-something year old calligrapher, and his boyfriend old friend who runs a bar.

Why Should I Watch It? Sk8 is funny and emotional, with a solid plot and absolutely stellar cast. Even if you don’t like sports anime, it’s also a phenomenal character drama with some truly captivating visuals and animation.

Is There Any Reason I Might Not Like It? The antagonist, ADAM, is a grown man who is fixated on a teenage boy and refers to his one-sided obsession with him as if it’s a romance. This is explained via childhood abuse, which maybe won’t hit as intended if you also have a history of abuse.

Who’s The Best Character? Most of the main cast is pretty awesome, but special mention goes to Shadow, a character I did not much care for on his introduction but who has successfully won me over by being the biggest dork in the entire cast.

Where Can I Watch It and How Long Is It? It’s available on Funimation, with each of the 12 episodes being roughly 25 minutes long.

What’s It About? Teenage(?) half-zombie works at his foster dad’s yokai detective agency while said dad looks for his (the boy’s) biological parents.

Why Should I Watch It? Cause it’s good. At first my enjoyment of it was at least partly colored by the fact that it did everything right that Dr Ramune did wrong, but it carried through to the end of the season and was one of the shows I looked forward to the most every week. The characters are likeable and distinctive, it tackles tough topics in a tasteful and smart way, it’s funny when it’s trying to be funny and dramatic when it’s trying to be dramatic, and the action is well animated and they have some fun with Kabane’s inability to die.

Is There Any Reason I Might Not Like It? It’s mostly about abuse, both systemic and not, and depicts it both literally and figuratively. This spans everything from the physical to the emotional to the sexual, and it’s unapologetically frank about the way it shows the long-term emotional and psychological effects abuse victims suffer (Yui’s story in particular is especially rough). This is a shonen series, though, so the worst of it is mostly offscreen and the worst worse is only implied.

Where Can I Watch It And How Long Is It? Funimation, and it’s 12 episodes. Fingers crossed for a second season.